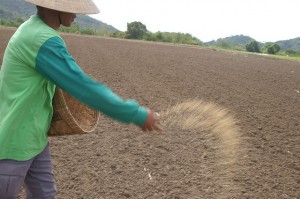 The Parable of the Sower

13:1 That same day Jesus went out of the house and sat beside the sea. 2 And great crowds gathered about him, so that he got into a boat and sat down. And the whole crowd stood on the beach. 3 And he told them many things in parables, saying: “A sower went out to sow. 4 And as he sowed, some seeds fell along the path, and the birds came and devoured them. 5 Other seeds fell on rocky ground, where they did not have much soil, and immediately they sprang up, since they had no depth of soil, 6 but when the sun rose they were scorched. And since they had no root, they withered away. 7 Other seeds fell among thorns, and the thorns grew up and choked them. 8 Other seeds fell on good soil and produced grain, some a hundredfold, some sixty, some thirty. 9 He who has ears, let him hear.”

The Parable of the Sower Explained

Would one even notice that small old man in the church parking lot being helped out of the big dark sport-utility vehicle on the second day of the General Assembly this week?  What about the 11 year-old girl sitting in the convention center auditorium which can hold 5,000 adults (plus children) for worship and business meetings?  How about the grubby men on the corners downtown and on the west end who are selling street newspapers for $1?  What about that tall person in a skirt who has a deep voice?   Not much potential there?

The young men in neat suits are much more impressive.  The women who sport red “clergy” ribbons on their nametags are certainly ones to take notice of.   Among the 5,000, some are carrying Bibles or heavy bags of books from the Christian book seller, they must be faithful to their spiritual disciplines.   Others walk straight and tall, like they know where they are going.  The few who get to speak into microphones from stage, their voices ringing across acres of seating, they must be fertile ground open to the Spirit.

That little old man turns out to be Fred Craddock, one of the most renowned Disciples preachers.  He was on his way to preach to a congregation overflowing both the sanctuary and the basement.  That little girl is a voting delegate to the Assembly from Indiana.  She could have participated in the children’s activities this week, but instead she participated in business meetings.  I didn’t learn much about the men on the street corners because, honestly, I didn’t do much beside walk by and sometimes say “good morning.”  We did hear the story this week about a group of homeless men in California who have begun a bicycle ministry.  They repair and even build bicycles from cast-off parts, and give the ‘new’ bicycles to children who don’t have much else.  I wonder what ministry the corner-men are engaged in here in Nashville.  And that tall person in a skirt?  She reminded us of our identities Wednesday morning.  She had to stand up and tell the church gathered from across the world that each of us is a child of God, because she wasn’t always treated that way at this Assembly of Christians.

Here in Matthew, this seed-planter sure doesn’t seem like a very good farmer.  He tosses valuable seed all over the place, what a waste of time and resources.  I wonder why he would scatter seed on rocky ground, on the path, in the thorns?  Shouldn’t the seed just be scattered on the good soil?  Any good farmer would recognize good soil, wouldn’t he?