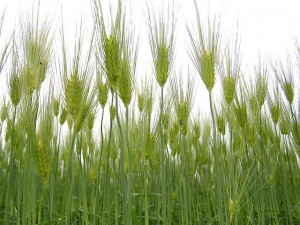 The Parable of the Weeds

24 He put another parable before them, saying, “The kingdom of heaven may be compared to a man who sowed good seed in his field, 25 but while his men were sleeping, his enemy came and sowed weeds among the wheat and went away. 26 So when the plants came up and bore grain, then the weeds appeared also. 27 And the servants of the master of the house came and said to him, ‘Master, did you not sow good seed in your field? How then does it have weeds?’ 28 He said to them, ‘An enemy has done this.’ So the servants said to him, ‘Then do you want us to go and gather them?’ 29 But he said, ‘No, lest in gathering the weeds you root up the wheat along with them. 30 Let both grow together until the harvest, and at harvest time I will tell the reapers, Gather the weeds first and bind them in bundles to be burned, but gather the wheat into my barn.’”

The Parable of the Weeds Explained

36 Then he left the crowds and went into the house. And his disciples came to him, saying, “Explain to us the parable of the weeds of the field.” 37 He answered, “The one who sows the good seed is the Son of Man. 38 The field is the world, and the good seed is the sons of the kingdom. The weeds are the sons of the evil one, 39 and the enemy who sowed them is the devil. The harvest is the close of the age, and the reapers are angels. 40 Just as the weeds are gathered and burned with fire, so will it be at the close of the age. 41 The Son of Man will send his angels, and they will gather out of his kingdom all causes of sin and all law-breakers, 42 and throw them into the fiery furnace. In that place there will be weeping and gnashing of teeth. 43 Then the righteous will shine like the sun in the kingdom of their Father. He who has ears, let him hear.

There is a wild, irresponsible unmarried mother who got in a serious car accident in a new novel by Ellen Airgood called “South of Superior.”  The people of the small town in this novel pooled some of their limited monies to cover this woman’s medical bills and for the care of her young son while she was in the hospital.   But the townspeople aren’t described as saints.  No, many don’t like this young mother’s choices and they don’t always like each other.  But when there is a crisis, they can count on each other.

I thought about that fictional town as I wondered what was going on in the congregation who first heard the Gospel of Matthew.  This parable talks about a field full of good seed and a sneaky enemy messing up things by sowing weeds in the night.  Was there conflict in that first congregation? Perhaps people were taking sides over an issue, calling the other side “enemy?”   It might seem odd, but in the parable the two kinds of plants are left to grow together in order to protect the wheat.  The Son of Man is the one to sort it all out in the end.

What does this say for us living in communities of faith?  We don’t always like everyone who sits with us in worship Sunday morning (whether in person or virtually).  Too often, sadly, we decide we know for sure that someone who has a very different stand on an issue is not just ill-informed, but not quite as human as we are.  Matthew might say that we don’t even know for sure who is wheat and who is weed.   It is not even our job to decide.  In this parable, the job of the wheat and the weeds is to grow up and mature together.

Would it change how we live together if we could let God decide?