↓
Home→Our Stories→Devotions→Devotion for July 25, 2011 – Weed Seeds and the Kingdom Of Heaven 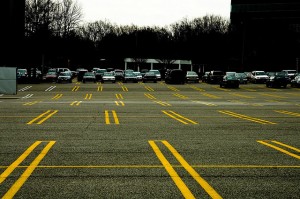 The Mustard Seed and the Leaven

31 He put another parable before them, saying, “The kingdom of heaven is like a grain of mustard seed that a man took and sowed in his field. 32 It is the smallest of all seeds, but when it has grown it is larger than all the garden plants and becomes a tree, so that the birds of the air come and make nests in its branches.”

33 He told them another parable. “The kingdom of heaven is like leaven that a woman took and hid in three measures of flour, till it was all leavened.”

The Parable of the Hidden Treasure

44 “The kingdom of heaven is like treasure hidden in a field, which a man found and covered up. Then in his joy he goes and sells all that he has and buys that field.

How close did I come to the kingdom of heaven today and miss seeing it? On the first Saturday of our denomination’s General Assembly, I arrived early at the Convention Center in downtown Nashville, and pulled into the empty surface parking lot across the street from the Center. As I pulled into a parking spot, a man from the street hailed me. With grand arm gestures and a loud voice, he called me over to him. He introduced himself as the most famous homeless man in Nashville. Then he told me a secret: while this surface parking lot was $17 per day, the parking structure just next to the Convention Center was only $4 for Saturday and Sunday, and $8 for all day weekdays. The most famous homeless man in Nashville talked a lot. Inserted into his rapid speech was a reminder that he had an agenda in giving me this valuable information.

Then, he asked me if I was a part of the convention going on there. “Yes, Sir; I am.”

“Is this some kind of religious thing?”

“That’s bad for me, you know. Religious folk don’t give as well as other groups.”

That morsel of truth didn’t surprise me, but it did make me sad. On the inside of the convention hall, 5000 Disciples of Christ were gathering to remind one another to “Tell It!” to encourage one another to share our faith with a world hungry for Good News. Meanwhile, outside the hotel, the homeless ones were dreading an influx of “religious folks” because that meant a serious decline in the amount of alms given to them.

There are so many people outside the church who have experienced our worst side. From their perspective, Christians are people who like to go to church (and conventions) to feel good about themselves, but then show no evidence of Christ in their lives outside the church.

Weed seeds, or evidence of the Kingdom of Heaven come near?