↓
Home→Our Stories→Devotions→Devotion for May 13, 2011 – Easter as a season rather than a day 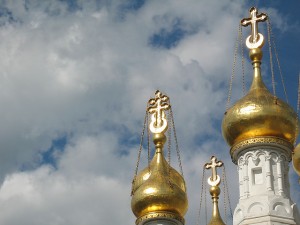 18 Mary Magdalene went and announced to the disciples, “I have seen the Lord”—and that he had said these things to her.

In 1974 my wife, Susan, and I were “Fraternal Workers” for the Division of Overseas Ministries for the Christian Church (Disciples of Christ) attached to the Protestant Church of Belgium in Brussels.

A few days after Easter, we visited a friend in Moscow for ten days to participate in a program he had developed for study of the life and ministry of the church in the Soviet Union.  We were amazed at the vitality we found both in Russian Baptist and in Orthodox churches. It would literally take hours to relate the learnings of that visit. To this day, however, it is a theological and spiritual insight rather than an academic one that means the most.

We discovered that during the season of the church year immediately following the celebration of resurrection, a simple “Hello” is not an adequate greeting between Russian Christians.  Time after time we heard them joyously address one another with “Christ is risen!” with the response being “Christ is risen indeed!” We were told that this greeting would be used consistently until the day of Pentecost.

In today’s church, we try to say that Easter is a season and not just a day, but we don’t always do it very well. We take down the decorations and impatiently move on. We do not greet one another in the way of our brothers and sisters of the Eastern churches. Let us never forget, no matter what day of the year that “Christ is risen!”  Yes, “Christ is risen, indeed!”