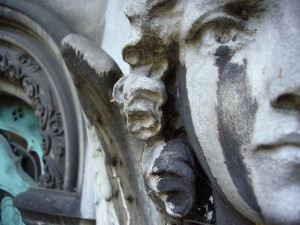 18 Servants, be subject to your masters with all respect, not only to the good and gentle but also to the unjust.19 For this is a gracious thing, when, mindful of God, one endures sorrows while suffering unjustly. 20 For what credit is it if, when you sin and are beaten for it, you endure? But if when you do good and suffer for it you endure, this is a gracious thing in the sight of God. 21 For to this you have been called, because Christ also suffered for you, leaving you an example, so that you might follow in his steps. 22 He committed no sin, neither was deceit found in his mouth. 23 When he was reviled, he did not revile in return; when he suffered, he did not threaten, but continued entrusting himself to him who judges justly. 24 He himself bore our sins in his body on the tree, that we might die to sin and live to righteousness. By his wounds you have been healed. 25 For you were straying like sheep, but have now returned to the Shepherd and Overseer of your souls.

I added verse 18 to the above lectionary reading.  It’s a tough text, and I wanted to give just a little more context.  This reading can be encouraging to some and painful to others.  Sadly, the Bible has sometimes been used to oppress people through the ages.  In the United States, for example, it was used to support the enslavement of persons for the economic benefit of the dominant culture in both the south and the north.  Some pastors today still use scripture to encourage abused women to stay “obedient” to their husbands even though their lives may be at risk in their marriages.  Such use of scripture is in direct contrast to the love which is the basic nature of God and the just and whole relationships which Jesus taught and modeled.  So how do we deal with passages like this one that could be used to support violence and oppression?

The letter we know as 1 Peter was originally addressed to churches around Asia Minor, what is modern day Turkey.  Some of the people in these churches were living in direct contrast to the cultural expectations of their times and location.  Women and slaves were supposed to follow the religion of their household, the one their husbands and their masters followed.  Jesus-followers, however, were not willing to give up their faith in order to follow the expectations of their station in life, and some of them suffered for it.  Victims of abuse in that time and place had no recourse.

This letter to the churches in Asia Minor encourages victims that their suffering should not be interpreted as God’s rejection of them.  This letter also counsels slaves against fighting violence with violence.  This advice is not to have no reaction to injustice.  The advice in 1 Peter is to respond non-violently.  Non-violence is a powerful and active response to oppression and abuse, as Rev. Dr. Martin Luther King, Jr. demonstrated and taught, and it reflects the loving kindness of God.

Today, victims of abuse in the U.S. have more non-violent options.  There are domestic violence shelters, supportive agencies, and laws to protect people from abusers even within their own families.  Protecting oneself is an appropriate response for Jesus-followers today.  We seek to work for the healing of both the abused persons and the abusers, because we follow a God of grace who loves us all.

This little devotion just scratches the surface of an important discussion that relates to suffering, violence, oppression, and the interpretation of scripture.  If you would like to continue the conversation, here are a couple of possible options.   As always, you may send your prayer requests to prayers@disciplesnet.org.  You may also send your questions to ask@disciplesnet.org.