↓
Home→Our Stories→Devotions→Devotion for September 16, 2011 – Stop worrying about your chickens – Faith in rural China 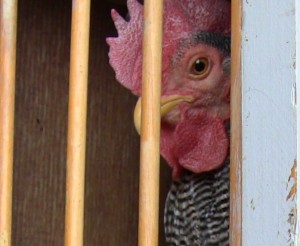 Isaiah's Vision of the Lord

“Holy, holy, holy is the Lord of hosts;
the whole earth is full of his glory!”

4 And the foundations of the thresholds shook at the voice of him who called, and the house was filled with smoke.5 And I said: “Woe is me! For I am lost; for I am a man of unclean lips, and I dwell in the midst of a people of unclean lips; for my eyes have seen the King, the Lord of hosts!”

6 Then one of the seraphim flew to me, having in his hand a burning coal that he had taken with tongs from the altar. 7 And he touched my mouth and said: “Behold, this has touched your lips; your guilt is taken away, and your sin atoned for.”

Isaiah's Commission from the Lord

We often hear stories of religious oppression in China, but my experiences have shown me something not captured so easily on the nightly news; despite the limits, churches here are growing even faster than China’s GDP . Here in Nanjing one church has added 4,000 members in the last 15 years and is baptizing 200 believers annually.

The biggest challenge church leaders report is not the government restrictions, but training enough pastors to meet the needs of China’s churches. This growth isn’t the result of massive missionary efforts from the west after China’s opening, but fruits of the work being quietly done by Chinese believers who held on to their faith through all of China’s turmoil.

Today I would like to share with you the story of a single man’s conversion as he told it to me.

Mr. K is about 40 years old and has a smile that makes you want to hear what he has to say. He was born in Northern Jiangsu province into a family of farmers.

My father and mother died when I was young. They had tasked my brothers and sisters to help raise me because China was poor at that time and life was incredibly difficult.

I was 19 years old when I first learned about Christianity from a classmate’s mother-in-law. She had us pray before and after meals, which introduced us to these ideas for the first time. Then I had little interest in religion, but was willing to pray if it meant I could eat. It was hard for young people to be Christian then because we had been raised with folk religions and the political situation was not good.

One day I was walking past a small church and heard the sound of hymns being sung. When I glimpsed inside I saw that it was almost entirely elderly people. The feeling of comfort and peace I felt in that moment though led me to believe. I realized the nature of my sins and knew that despite these flaws, God cared for me. It was a moment of great joy.

After that I started memorizing parts of my Bible, and looked forward all week to my Sunday meetings with God.

In the congregation no one else had even a middle school education, and 90% of them were illiterate. So they started asking me to preach or help them with reading the Bible. Looking back, I can say that it was my happiest year.

Outside of church, my friends had encouraged me to start raising chickens. I had invested in the supplies: feed, eggs, fences. Today it seems like such a small amount of money, but at the time it was enough to make me feel nervous about such a large amount of debt. I was poor, and I felt that I needed to become rich.

One night I was outside, and sisters from the church came looking for me, but I didn’t hear them knocking on my door. When I heard that I had missed them, I became focused on why it was they were searching for me. I stared at the sky unable to sleep, I knew they were going to ask me to study at the seminary, but I wanted to say “no.” Then I remembered the verse that says, “Whom can I send? Who can go for us?” And I realized that for my church I was the only one who had enough education to do this on their behalf. It was my calling.

The next day a sister from the church came and asked me to study at the seminary, and I happily agreed.

I had been focused on raising chickens, but God told me to raise my sights.

I pray that God help me stop worrying about my chickens, and more fully trust in his plans for me, so that when I hear God’s call to serve the kingdom, I can be free of my tethers and ready to respond joyfully.

Tom currently lives in Nanjing, Jiangsu, China, where he works as an English teacher for Global Ministries.