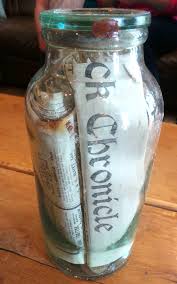 It is so important to remember Psalm 34:18, The Lord is close to the broken-hearted and saves those who are crushed in Spirit.

We are not in the Warsaw Ghetto.

This book is a journey through some teen girls’ lives. It becomes larger than each of their individuals put together. What started out as a project for the teen girls’ District National Day of History Competition, took on much more than they ever thought possible.

It is cold, snowy, blowy
It is bone-chilling cold
It is freeze during the night cold.
We are without homes and family,
We are without bread and drink.
We are without proper shelter.
We have a broken road to follow.
Our road on the ground is frozen.
Our feet touch the hallowed sacred ground.
The ghetto has become holy and sanctified.

We are not in the Warsaw Ghetto.

The girls do meet their unsung hero, Irene Sendler. She helped save thousands of children during World War 2. She hid their documents into jars and buried them under an apple tree. The children were given new names and lives. The Warsaw Ghetto was a place to house the Jews the Nazis had rounded up to be eventually exterminated. No one knew when or where they were to be picked up for annihilation. The Jews were in a constant state of fear. Irene brought some home to a few by helping their children to not suffer the same fate as their parents would. The teen girls’ play, Life in a Jar, honors the role of Irene Sendler. Irene never saw herself as a hero. She was just doing what was needed at the time. Life in a Jar is the teen girls’ project that helps to give Irene Sendler a living legacy through active history. The play started with just a few actors and has expanded to include more. I felt as if I was on a journey with the teen girls, as well as with Irene Sendler. Irene became friends with the teen girls until her death. She died from medical complications. The teen girls all graduated from a Kansas rural high school. There is also a movie about the Irene Sendler Project. The movie is called The Courageous Heart of Irene Sendler. It has been shown on the Hallmark Channel. When they were still teens, the girls visited Poland and saw the death camps. Their experience of Life in a Jar became more real to them. It expanded their view of the situations in the death camps.

We are not in the Warsaw Ghetto.
Death is not alive anymore.
The War Saw Ghetto is a living monument to the history of the future.

Eternal rest grant unto them, O Lord,
and let perpetual light shine upon them.
May the souls of all the faithful departed, through the mercy of God, rest in peace.