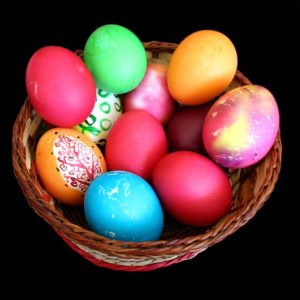 When the sabbath was over, Mary Magdalene, and Mary the mother of James, and Salome bought spices, so that they might go and anoint him. And very early on the first day of the week, when the sun had risen, they went to the tomb. They had been saying to one another, “Who will roll away the stone for us from the entrance to the tomb?” When they looked up, they saw that the stone, which was very large, had already been rolled back. As they entered the tomb, they saw a young man, dressed in a white robe, sitting on the right side; and they were alarmed.  But he said to them, “Do not be alarmed; you are looking for Jesus of Nazareth, who was crucified. He has been raised; he is not here. Look, there is the place they laid him.  But go, tell his disciples and Peter that he is going ahead of you to Galilee; there you will see him, just as he told you.”  So they went out and fled from the tomb, for terror and amazement had seized them; and they said nothing to anyone, for they were afraid.  -Mark 16:1-8 (NRSV)

If you think about it, the Resurrection Story in Mark is actually an empty tomb story. I choose this reading, because my two-year old grandson was showing me his Easter basket full of Easter eggs, and they reminded me of the tradition of Easter eggs in the Church, where they symbolize the empty tomb.

My grandson could not wait to show me his basket of eggs, but imagine my surprise when he pointed to one of them, looked at me with wide eyes full of wonder, and said, “Dinosaur egg!”

I thought this was both hilarious and delightful, but then I started thinking: What if it really was a dinosaur egg?  What if the egg started wiggling and something started cracking through, and instead of a chicken – it was a dinosaur! Certainly not what I would have expected is a severe understatement.

Would you be:  Shocked? Amazed?  Astonished? Bewildered? Disturbed? Afraid? Terrified when you thought about what this baby dinosaur would grow into, and how it would change the world?

And would you be excited to share the news, like my grandson was, or would you stare at the empty shell and swear to yourself that you would tell no one, because they would never believe you?

Year after year we practice our long-held traditions of Easter. But it seems to me that our tradition of Easter eggs has evolved to egg hunts and chocolate and bunnies. It may seem shocking to us now, but this tradition started with the early Christians in Mesopotamia, where they painted the eggs red, in the terrifying memory of the blood of Christ shed on the Cross.

So this Easter, when I see an Easter egg, you will probably not be surprised that I won’t think of chocolate and bunnies, but of a Dinosaur egg, and of the empty tomb. An unexpected and amazing and, yes, terrifying sight.  I will close my eyes and try to see it. Because I need to be reminded of the extreme emotions the women felt when they found an empty tomb. I need to be reminded of the intensity of their experience. And I need to ponder a child’s reaction of wonder and excitement, and of not being afraid to believe.