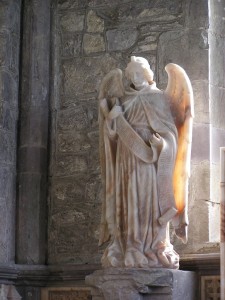 An angel near a tomb in St. David's Cathedral, Wales, UK

26 In the sixth month the angel Gabriel was sent from God to a city of Galilee named Nazareth, 27 to a virgin betrothed to a man whose name was Joseph, of the house of David. And the virgin's name was Mary. 28 And he came to her and said, “Greetings, O favored one, the Lord is with you!” 29 But she was greatly troubled at the saying, and tried to discern what sort of greeting this might be. 30 And the angel said to her, “Do not be afraid, Mary, for you have found favor with God. 31 And behold, you will conceive in your womb and bear a son, and you shall call his name Jesus. 32 He will be great and will be called the Son of the Most High. And the Lord God will give to him the throne of his father David, 33 and he will reign over the house of Jacob forever, and of his kingdom there will be no end.”

35 And the angel answered her, “The Holy Spirit will come upon you, and the power of the Most High will overshadow you; therefore the child to be born will be called holy—the Son of God. 36 And behold, your relative Elizabeth in her old age has also conceived a son, and this is the sixth month with her who was called barren.37 For nothing will be impossible with God.” 38 And Mary said, “Behold, I am the servant of the Lord; let it be to me according to your word.” And the angel departed from her.

Few accounts of angels are found in the Bible, but every incident is special because it imparts a message from Go to human beings.  This particular angel was speaking to an astonished young girl named Mary, informing her that she was to become the mother of the Almighty Son of God.  A bit later, an angel appeared to Mary’s fiancé in a dream, telling him not to be afraid to take Mary as his wife, that she was pregnant by the Holy Spirit.  Later still, after Jesus’ birth, a host of angels appeared in the sky to a group of shepherds, praising God.

In all three incidents, the Bible tells us this was “good news of great joy.”  Even Mary, to whom this news must have been a mixture of surprise and fear, accepted this thrilling announcement with great joy.  Had I been Mary and faced with a fiancé who would undoubtedly assume infidelity and could legally have me stoned, I’m not sure my joy would outweigh the fear.  But the angel must have instilled in her a consuming confidence, for all she said was, “I am the Lord’s servant,...May it be to me as you have said.” (v. 38)

How long has it been since you received good news?  Very little news found on television, e-mail, Facebook, snail mail, and the telephone is truly good news.  Faced with elevated blood pressure, I was advised by my doctor to stop reading the daily newspaper and watching the evening news.  He said anyone with any compassion at all would be left with rising blood pressure after reading and watching current events.  Any good news is added at the end, almost as a postscript.

Mary could not have understood completely what was involved in bearing God’s Son.  As was the custom of the day, she would have been only 13 or 14 years old, and still innocent and impressionable.  Yet God chose this girl-child to be the mother of His Son.  The three short sentences the angel said would have been utterly incredible to her.  However, she took them at face value and said ... “Here I am, Lord.  I am yours.”

Joseph must have lain awake for several nights worrying about what to do. ...The angel who came to him must have been extremely convincing, because Joseph instantly believed and readied himself for the business of support a wife and child.

And the shepherds... Can’t you see them trembling with fear when the sky was suddenly filled with a great light and beautiful angels with fluttering wings told them of the birth of a holy child in nearby Bethlehem? ... But a few must have watched and listened with jaw-dropping awe, for they were the ones who insisted to go to town and see for themselves what the angels were talking about.

If tonight, as we stepped outside our homes and found the sky illed with angles announcing something wonderful, would we fall to our knees, like Mary, and say, Here I am, Lord.  Send me.

Think about it.  Pray about it.

God of strength and gentleness, forgive us our ears, our apathy, and our misguided thoughts.  Forgive our mistakes and our failures.  For with you there is no failure, there is only love and forgiveness.  Amen

Thanks to Marilyn Gardner for permission to use material from "Whispers From The Heart", an Advent Devotional. Marilyn is a professional writer and the mother of Nelda Seger, an associate at DisciplesNet Church.