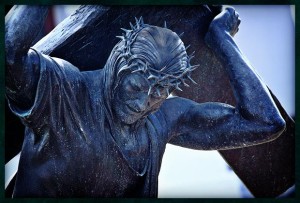 Hebrews 5:7-9
In the days of his flesh, Jesus offered up prayers and supplications, with loud cries and tears, to the one who was able to save him from death, and he was heard because of his reverent submission. Although he was a Son, he learned obedience through what he suffered; and having been made perfect, he became the source of eternal salvation for all who obey him,

Holy One
who heard the cries of Jesus
as he suffered on the cross,
Hear our prayers as well.
Give us the power to obey you
even as your Son did,
so that we may be of the same mind
that was in Christ Jesus
“who, though he was in the form of God,
did not regard equality with God
as something to be exploited,
but emptied himself,
taking the form of a slave,
being born in human likeness.
And being found in human form,
he humbled himself
and became obedient to the point of death—
even death on a cross.”**
In his precious name we pray,
Amen.